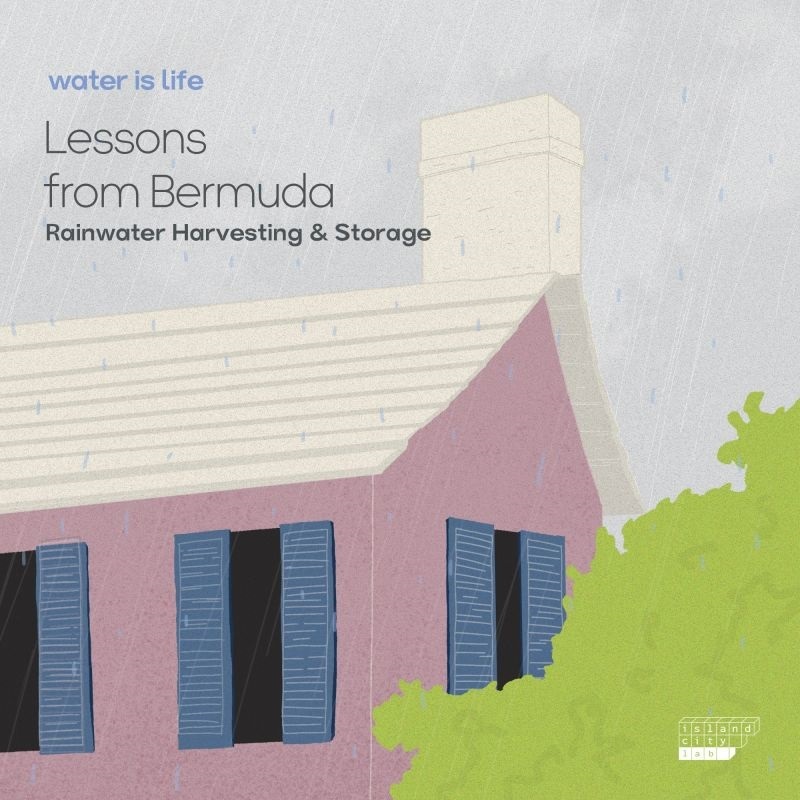 Island City Lab is a network of civic thinkers responding to the critical urban issues that affect Caribbean island nations. We understand that our cities face very unique challenges and require specific, context-driven solutions. Our goal is to build, foster and mobilize a network of lived and learned expertise across silos to confront these challenges.

LESSONS FROM BERMUDA: A CONVERSATION WITH SHAUN LAVIS

Hey Shaun, thanks for joining us, can you share your name, role, and length of service and can you describe the overarching goal of your organization?

Shaun Lavis (SL): Hey, my name is Shaun Lavis, a hydrogeologist that works for the Department of Environment and Natural Resources. Our overarching goal is to protect Bermuda’s environment and responsibly manage its natural resources. We do that across six main areas:

The department has a broad scope, and it’s a great department to work for. I work with experts from different fields, and it’s great when we get to collaborate on projects.

Some of our readers may be unfamiliar with Bermuda, what are the major components of its water supply system?

The potable water is distributed through two main networks, one owned by the government and one owned by Bermuda Water Works. A smaller amount of water is provided by our ‘truckers’ companies that use water trucks to bring water to your tank when it is low. It costs about $100 USD (about $15,000 JMD) per 1000 gallons.

What is reverse osmosis?

SL: Basically, reverse osmosis works by squeezing water across a semi-permeable membrane. With seawater osmosis, you need to pump up the pressure much higher because of the salt content, which requires a lot of energy. But with brackish or fresh groundwater, you don’t need to pump the water as hard, requiring less energy to produce the same volume of potable water. You can’t drink the water directly from the lens (groundwater aquifer); it needs to be processed, so the government and a few companies are producing drinking water from the lens via reverse osmosis.

There are also non-potable water uses: About 2300 residents have a well to abstract groundwater. While in most cases, this water is unsafe to drink because of contamination from our cesspits, it can be used for flushing toilets and irrigation, as a heat sink for air conditioning systems, and for washing machines.

Why is household rainwater collection such a major component of the water system?

In 1951 regulations came into effect, which stipulated that all buildings need 80% or more of the roof to be guttered for collecting rainwater.

SL: My guess, is that it is largely because of Bermuda’s history. When the original settlers came to Bermuda, they had to set up rainwater harvesting systems because there were no major surface water sources on the island. Additionally, it took us some time to realize that there was plenty of water in the ground. We didn’t really abstract the groundwater in significant quantities until the 20th century.

So historically, rainwater harvesting systems have always been here. In 1951 regulations came into effect (the Public Health, Water Storage Regulations), which stipulated that all buildings need 80% or more of the roof to be guttered for collecting rainwater. It also described how large the rainwater storage tank needed to be. So now, every new building must have a rain catch and a tank.

Yes, it does. The Public Health Regulation is the law, and the building code (chapter 28, pg 271) refers to that law which also provides more information on the construction of the tanks and what you can and can’t put near them.

What are the benefits of the traditional limestone stepped roofs?

SL: Well, first is that the design is proven, having been used for hundreds of years, and is robust enough to withstand most of the hurricanes that come this way. We are a small island, and we sit thousands of miles away from the nearest source of any other rock. The original roofs were made by cutting slate (hand-cut slabs of Bermudian carbonate rock) from Bermuda’s geology. So a second benefit is that materials for these roofs can be sourced locally. Unfortunately, the sources of our slate are beginning to run out. Some artificial products are being introduced now, and as time goes on, I expect more and more roofs will be made out of these products rather than locally sourced slate.

Another benefit is that they look nice and are a part of the ‘Bermudan Image’ and the Bermuda Building Plan describes how new buildings need to be consistent with that image. And lastly, they are effective at catching rainwater. When it rains really hard, you may see water pouring over the gutters on the side, some water is lost, but most of the time, they are very effective at getting the rainwater and directing it to the tank as quickly as possible.

Apart from providing a secure source of water, what are the other benefits of mandated rainwater harvesting on an island-wide level?

SL: One added benefit is that as our roofs are painted white, they help keep the heat down in the house by reflecting sunlight.

Another benefit is that they help to reduce runoff during storm events. To note, Bermuda’s building code mandates that “stormwater runoff shall be maintained entirely on the application site”. Bermuda is quite densely populated, so there’s quite a lot of roof space, which produces a lot of rainwater that can be safely stored in our tanks. The fact that the water is captured from the roof, stored in a tank, and then used in the house means it eventually ends up in a cesspit where it helps to recharge the groundwater. In fact, groundwater recharge in Bermuda is very high. So a key benefit is that the roofs enable high groundwater recharge, helping to maintain the groundwater lenses (in areas where the lenses are developed).

SL: Rainwater harvesting has other advantages, the amount of CO2 produced per gallon of water consumed is low because we are capturing water straight from the sky. Rainwater harvesting also forces people to be aware of their water consumption. I’m pretty careful when I’m brushing my teeth or washing the dishes or anything like that to make sure I am not using too much water, and I think that’s a pretty good benefit in itself.

And a final benefit is it reduces costs to households. Water bills are essentially zero for people who can rely solely on rainwater harvesting, but you do need to pay to clean your tank or have your roof maintained (typically by cleaning and painting every 6 years, as required by law).

What are the anticipated climate change implications for Bermuda’s water supply?

…an outcome of sea-level rise over time is that the volume of rock available to develop the freshwater lenses is going to slowly decrease.

SL: From my understanding, there is no clear evidence to suggest that we will have a significantly reduced rainfall when averaged over each year. The hypothesis is that rainfall will probably be more variable throughout the year. There might be long periods of drought, but there will also be periods of extreme rainfall that will average out to similar totals as we receive now.

In terms of sea-level rise and saltwater intrusion, saltwater intrusion can have a couple of meanings. In some places, you may have a storm surge where the salt water will flow to significant distances inland and infiltrate down on top of the freshwater. To my knowledge, we have not had that problem here. I think an outcome of sea-level rise over time is that the volume of rock available to develop the freshwater lenses is going to slowly decrease. The sea level is projected to rise relatively slowly, so it’s probably going to take a long time for the volume of the freshwater lens to be severely impacted by sea-level rise.

The other issue is the cost of energy for our desalination plants. We still have a lot of capacity in our groundwater lenses that we have not tapped into that can produce more potable water through reverse osmosis. So the supply of low salinity water is there, and energy costs are likely to increase, it makes sense to move towards using more of our low salinity water instead of the seawater-based desalination plants.

With increased population density and increased water demand from tourism, how is Bermuda balancing growth with the need for water security?

SL: I understand that current projections indicate that our population is expected to fall, as I think it has over the last few years. After the 2008 financial crash, our population dropped and is expected to continue to fall as people age and birth rates remain below replacement. I am not sure about the tourist projections, so I can’t say if demand will increase to the extent that we can’t cover it with our current supply. And as I said, the lenses are underutilized at the moment, so there’s more capacity available. I would say, as long as the price of energy is affordable and we have a sufficient supply of rain, we should be able to meet demand with groundwater and seawater reverse osmosis.

Lessons for the rest of the Caribbean

Any lessons or thoughts you would like to share with other Caribbean islands striving for water security?

SL: I think the rainwater harvesting system we have here is pretty good. And while it is difficult to retrofit a system like this – it’s never too late to start. If other island cities/towns are becoming more densely populated, then establishing new regulations so that new buildings have to harvest rainwater might help alleviate the situation.

The other thing to explore is greywater recycling. I know people who recycle water from their showers and use it for flushing and irrigation (and it’s apparently great for bananas). Searching for new groundwater resources would be beneficial since it would ensure that existing resources are effectively managed and used sustainably.

I guess the other thing is to keep an eye on new energy and emerging low-energy water treatment technologies, such as compressed coal filtration. Also, necessity is the mother of invention, a lot of research and start-up companies are developing low-energy/low-cost water treatment technologies. Keeping an eye on new developments and perhaps getting involved in the research is a good step towards water security.

Shaun, you have been very generous with your time, thank you so much for talking to us.

SL: No problem at all, happy to speak with you both. All the best with your research.Report this

is a hydrogeologist at the Department of Environment and Natural Resources in the Government of Bermuda. He had a lot to teach us about how a very small island in the Caribbean survives with no sources of freshwater by collecting it from the rain.